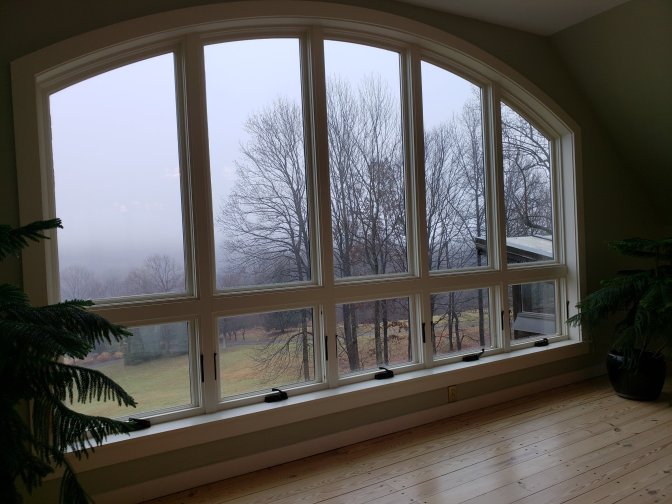 Well, dad and I made it to the last day open at Linden in 2018.  Despite torrential rains (and some high water on the sides of the road) we got there at 11:30, and the place was already packed! The owner, Jim Law, was running a tasting at one bar, but there was no room there. Nonetheless, we had great service and good info at the second bar.

Eight wines were being sampled today – current releases compared to library versions.  Some of the library versions were older than others.  First up – the Hardscrabble Chardonnay.  At Linden, there are three Vineyards, and Hardscrabble is the name for the vineyard on which the tasting room sits.  All the grapes were grown on this property.  The 2015 (current vintage) is a very strong chardonnay – crisp and acidic with an almost butterscotch flavor lingering at the very end.  This is dad’s favorite Linden wine, and it’s a really good one.  When they poured this one, they also poured the 2002 Hardscrabble Chardonnay.  I was pretty shocked – a 16-year-old white wine from Virginia?  Sure enough, it was smooth and subtle, and had the slightest tinge of sweetness and floral taste and feel to it.  It’s amazing to me that this wine was so strong after so long in the bottle.  However, customers were buying it by the glass like crazy.  Dad liked it too, but preferred the ’15 (as did I!).

Next up, the Avenius Sauvignon Blanc – The current release is the 2017, and the library comparison was the 2016.  Not terribly old, but there were subtle differences.  The crisp clean acidity of the ’17 that I absolutely love and adore was mellower in the 2016 – that extra year in the bottle really smoothed it out.  For Sauvignon Blanc, I do tend to like it younger and crisper, so the ’17 remained my favorite.

Moving to reds we had the ’14 and ’15 Claret.  I found the differences here to be fascinating, and got good explanation from the pourer (and later from Jim Law himself when he had a free moment at the other bar.  I learned that the ’14 growing year had a long dry spell in late summer and then lots of rain right at the end.  The dry spell followed by the rains yielded grapes with more acid to them, and the wine is much more acidic and has a little bit of a bite to it – the flavors in it are fantastic, but it is higher in acidity.  The ’15, from a much more typical Virginia growing year, is remarkably pleasant and smooth, with lots of dark fruit flavors coming together nicely in it.

The showstopper was the Hardscrabble Red – a Bordeaux Blend that is heavenly.  We tasted the ’15 current release and the ’07 library release.  Some important facts about the ’07 – one is that he used different and new barrels for the wine to age – and was working with Rutger de Vink from RdV (before he started RdV).  The second is that it had some carmenere in it – from before Linden got rid of those vines in favor of more cab sauv.  Both were incredible red blends – with the 2015 tasting very mature – rich, smooth, some velvet to it with a hint of spice at the very end.  The ’07 interestingly, was sharper, with a little more acidity and tannin to it, but after opening up for a bit, was a simply incredible wine.

So that was it for the tasting.  Dad and I chose to get a glass each, along with a cheese board.  Dad got the ’15 Claret and I got the ’07 Hardscrabble Red.  We put in an order for some wine (really, I did buy some to be given away) and went upstairs to enjoy our glasses and wait for our board. 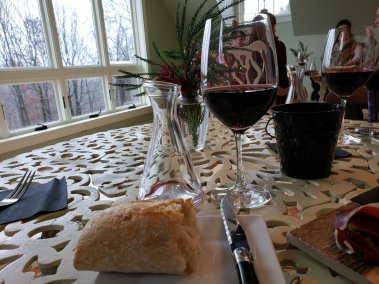 The board featured two nice, warm baguettes, an olive tapenade, duck prosciutto, and two cheese – a soft cheese from cow’s milk and a harder goat cheese (I must have those mixed up because I cannot recall having a hard goat’s milk cheese ever).  It was really quite incredible, and the reds paired with everything on the plate.

I love that the owner/winemaker was so accessible and spoke so freely about his craft, and I wish I had more questions to ask him.  I’m hoping to find a time to go back in the future with my questions for him and learn more.  One awesome thing about his website is that he journals on it about his process.  I highly recommend a read.

Linden is incredible, and if you ever want to ride along or meet up there, let me know!