I’ve been looking forward to this Saturday seminar for a while. I’m overall pretty uneducated when it comes to wine, I just like what I like and go on and on about it.  This was a chance to hear and learn from people who’ve actually learned about this stuff and think deeply about it.  It did NOT disappoint at all. Wine Friend 1 and I had an awesome afternoon sipping and learning and thinking about the wines.

The gist of this session, the second in a series of three, was focused on identifying and comparing specific characteristics within wine that we talk about when we taste it – look at the impact of oxygen and acid, new world versus old world winemaking, considering weight and volume, and the impact of oak on a wine.

What an awesome way to spend a Saturday afternoon!

Jason, Arterra winemaker and co-owner, and Dale, who is one of the tasting room associates at Arterra and their certified sommelier on staff, led the session.  The respect, chemistry, and friendship was evident throughout as they responded to each other’s thoughts and added on ideas or went in different directions.

The seminar went through small tastings of fourteen different wines, each selected to showcase an aspect of winemaking or wine characteristics.  The first five were a flight of white wines.  1-3 were Resiling – a New World style Riesling from the Finger Lakes region that showed the bright, fruity, floral style common to new world winemaking.  I got a strong sweet taste from the residual sugar (though it was labeled dry) along with some lemon.  It was a nice, albeit sweet wine.

The second wine was an old world style wine, a Riesling that was a premier cru from Alsace.  This was truly dry, and Jason noted that it was made with native yeast.  It was also 14% alcohol! But it was a smooth wine, and more muted than I expected from a 2015.  Jason and Dale noted that in producing the wine, the winemaker stuck to old world techniques which led to a wine that they described as “chewy.”  I thought it was an extremely pleasant Riesling, which is not one of my favorite varietals.  This one was a 2015 Mader Riesling Rosacker from Alsace.

Arterra’s final vintage of riesling, made from juice purchased from the finger lakes, was our third wine in this trio.  This is a pleasant wine, all natural yeast, and Jason focused on trying to bring together the best of new world and old world while leaving out the worst (in his words!).  So he sought the vivid characteristics but also the volume and lasting nature of the wine.  His riesling was a nice one, and will be missed, as they will no longer be making it in order to focus on estate wines.

The final two white wines were chardonnay.  First was Arterra’s, a very nice, crisp, clear chardonnay.  We had this with a great discussion about chardonnay and how it makes great wine all over the world, and that it clearly shows the impact of climate in its taste.  We compared this with a California chardonnay, and saw what they meant.  Because Virginia has warm days and warm nights all summer, the grapes ripen with relatively lower levels of malic acid.  In California, where nights are cooler but days are hot, more malic acid is present in the grapes at harvest.  The malic acid will eventually go through “Malolactic fermentation,” so that the malic acid turns into lactic acid, which gives it that buttery creamy taste.  This was quite fascinating and led to a discussion of how some wineries in Virginia, in an effort to mimic the wildly popular commercial style of the California wine, actually add malic acid to make the wine undergo malolactic fermentation and have that buttery taste.  When that happens it means advertising has covered up the true nature of Virginia chardonnay though, as the best Virginia chardonnays aren’t coming through this way since they don’t grow that way here.

We had a rinse and snack (they provided crackers and a delicious smoked cheese), and round two began. 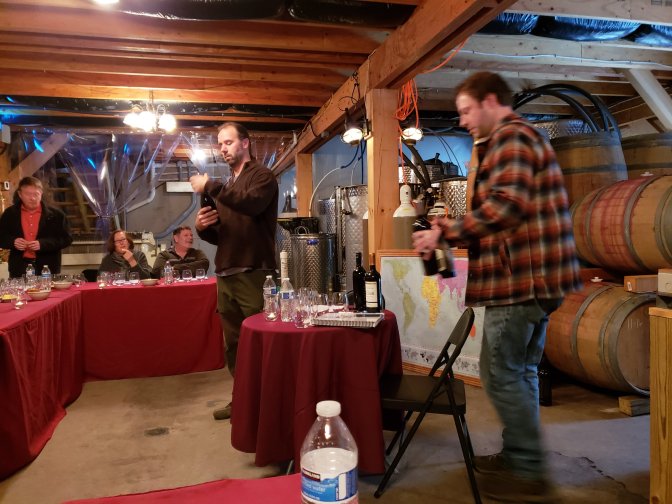 Sorry Dale, you wound up a little bit blurry there.

Flight two was four red wines, examined in two groups of two.  The first one was an upcoming Arterra release, the 2017 vintage of Petite Sirah.  Jason barrels the wines in neutral oak, preferring not to confer that oak taste onto the wine.  The second wine was a special project of Dale’s, 60% the same Petite Sirah mixed with 40% Washington State Mourvedre.  He put this in new American oak, and an aggressive one at that, and he has rebarreled it in stainless steel drum to stop the additional oak flavors going into the wine now.

I actually loved both of these, and expect both will develop in really interesting directions.  I’m wondering if these will be in a fall release of 2017 reds? Hmmmm…

The next two wines were different Bordeaux blends from Fauquier county – one was Slater Run‘s Roots – a great Bordeaux blend they chose because it highlighted the winemaker’s style – it was made by a French winemaker from Bordeaux.  This was compared to Arterra’s 2015 Reserve – their most recent release of a Bordeaux blend.  I really like both, and they showcase different aspects of old world versus new, and the new world reliance on production methods.

The final flight was five (actually six at the end) red wines to showcase the characteristic of weight.  We started with a very light Pinot Noir from New Zealand.  It was a simple and lean wine that didn’t pack much into the taste.  We next had Arterra’s Malbec (my current favorite wine) as an example of a medium-weight wine that was done in neutral oak.  Our third wine was another Bordeaux from Bordeaux, again medium-bodied but aged in new oak. Number four was a California Cabernet from Paso Robles that had a good bit of age on it, and Jason noted that it tasted as though it was right up against the end of its life.  I found it pleasant, but a little bit on the jammy side for my taste.  The last one on the list was an older Spanish GSM blend – an example of a heavyweight.  I liked this wine, but I generally love GSMs, and need to experiment and try more of them.  Sadly, they are not really a Virginia wine.  Jason brought down his 2016 Tannat to round off the heavier-weight bigger/darker wines.  This tannat surprises me with its smoothness. I still have a few bottles on my shelf.

Wine Friend 1 and I agree that the Alsace Riesling was a really nice surprise to have and learn about and we adore the Arterra lineup.  We felt we learned a ton about how oak is used to sometimes cover up fruit flaws or to attempt to meet the mass market expectations for wine and generate sales.  One of our loves about Arterra is how Jason works to balance old and new world styles to make the best wines, and he focuses on keeping them clean in order to express what the grape is really about – several times he mentioned that some wineries appear to attempt to “overcome the assumed bad fruit” instead of letting the grape express itself as wine.  In the case of Arterra’s wines, this leads to wine that feels very clean and tastes very unique – they don’t really reflect other Virginia grapes, but are rather doing something special here with the native yeast and combination of practices.  I’m excited to see what’s coming next and hoping the there will be a release of white wines coming soon that will knock the doors off.

Arterra celebrates 4 years on February 9, and the series has class three focusing on the role of terroir in wine, coming up soon. Tickets must be purchased as the class size is small, and that permits a lot of interaction and questions getting answered.  I highly recommend these events, as it’s just a fun way to learn more about wine and compare new wines to ones you love!