I saw a little information about Slater Run on another blog, did some research, and put it on the 2018 list.  I’m glad I did.

Unfortunately, I moved a little too slow in making my way there, as the winery tasting room closes in October for the Winter, but their storefront in Upperville sitting right on Rte 50 stays open year round.  While you can do a tasting of the Slater Run list, you also can drink or purchase a variety of other wines, Virginia and beyond.  It’s quite an interesting spot and concept. 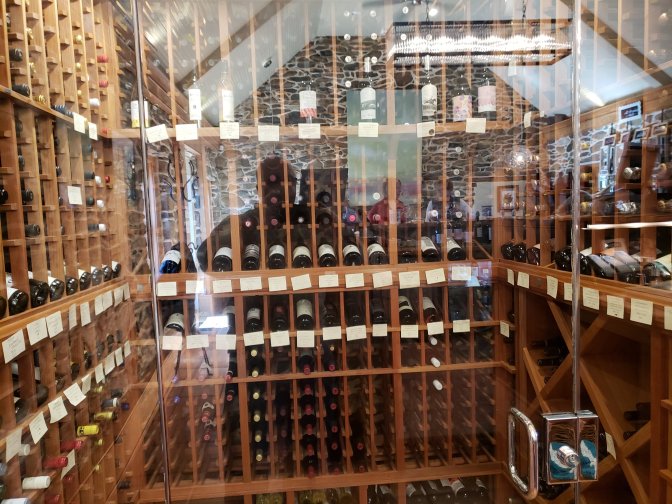 The tasting room itself is simply gorgeous.  It’s an old, old stone building, set up well to serve customers with a decent tasting bar and a small seating area.  When we got there a birthday party was mid-tasting, and they took up most of the bar, but we made it work.

The tasting list was generous, with 8 wines for the $12 fee. 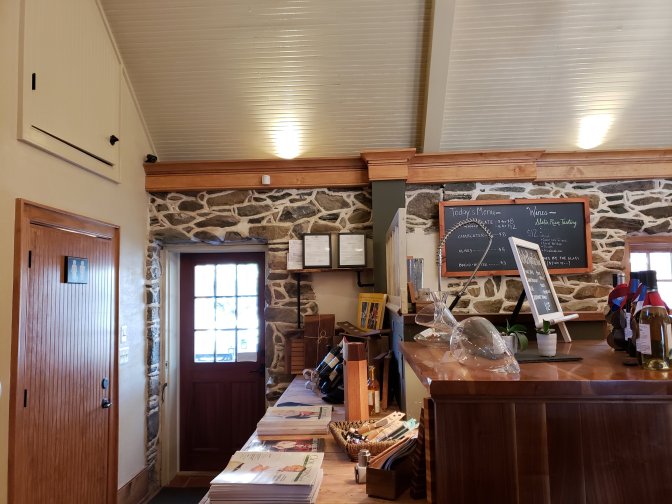 Our tasting started with something I had never heard of before, the 2018 White Pet Nat which apparently stands for the production method, Pétillant Naturel.  This was 70% Chardonnay and 30% Sauvignon Blanc.  When the taster pulled it up, I commented on the sediment – the bottle had a tremendous amount of sediment in the bottom, and that is when she explained the Pet-nat process.  There was no filtration done, and some secondary fermentation in the bottle.  Though she called it a Sparkling wine, I didn’t get much bubble at all from it, and really the overall taste was on the sour side.  This wasn’t at all what I wanted from the first pour, and I had been really curious to see what the blend would taste like, since I think Sauvignon Blanc grown in Virginia tends to be really solid. Neither Wine Friend 1 nor I liked this one.  Oddly, the birthday party crew bought a ton of it.

Second pour got much better, with the SRV 2017 Chardonnay.  Now we’re talking good whites in an old world style.  This one spent a little time in oak, but did not go through malolactic fermentation, so it retained a crisper taste.  Good and dry, this was a nice chardonnay.  Were it warmer outside, we could have gone for a glass, but hey, it is November.

Next up, the 2017 SRV Rose.  This rose is listed as 63% Cab Franc, 22% Cab Sauv and 15% Merlot.  An old world style rose! Happiness!  Pulled off the skins after being on there only briefly.  If you haven’t noticed, I don’t much care for rose that is a blend of a red and a white – that tends to taste funny to me.  This one had crisp and pleasant flavors and was a good dry rose.  Nice job on this one.

One of the fun things they did here was what they titled their “Alt Merlot 2017.”  They made two different merlots with the same grape batch – for one they used sulfites as a preservative in the process, and with one they didn’t.  She didn’t tell us which pour had sulfites and which one didn’t.  The first pour was very light and fruity – it was a good simple everyday kind of wine – pleasant to drink no matter what you’re eating.  The second pour was heavier and darker, with a much earthier taste to it.  There was very little fruity taste at the front and some smoky feeling to it.  So it makes sense to me that pour 2 was the one with sulfites added.  Wine Friend strongly preferred the without sulfites version – but I liked both.  I think I leaned a little more toward the with sulfites version for taste, but ended up buying a bottle of the without sulfites, because it had that cleaner and leaner taste that I am learning I really prefer.

Next up, 2016 100% cab franc.  We had heard the taster pour this for the birthday party crew and talk about how she felt it was the finest example of cab franc in Virginia, so I was eager to taste it.  It was a solid cab franc, with the expected dark and peppery flavor coming through, but light enough to enjoy with or without a meal.  It didn’t have the depth I tend to look for in cab franc though.  It was a nice example, but I didn’t end up bringing one home.

Red blends come next, first with First Bridge – a Bordeaux blend.  This one was heaviest in cab franc (38%) then 32% merlot, 28% cab sauv, and 2% petit verdot.  I was shocked at how dark the taste was and how strong the petit verdot and cab franc flavor came through.  This sip such a rich experience – lots of dark dark fruit and very pleasant flavors, with that very distinct petit verdot taste coming through.  I truly thought she had mixed the bottles up, because this one just felt like it had much more petit verdot in it.

The second red blend was the 2014 Roots – a big medal winner for them.  This one was 38% cab sauv, 28% cab franc, 18% petit verdot, and 16% merlot.  Given the ratio here, I expected an even darker and richer experience.  This was a wonderful red blend, but in my opinion, it was lighter than the First Bridge.  I would see this wine having more mass market appeal, but as it felt lighter to me, I ended up bringing home a bottle of First Bridge for the depth and darkness.

The final wine on the list was a 2017 named “Kalian.”  This dessert wine was made from grapes imported from the winemaker’s family in France, Monbazillac to be precise.  It was 70% Semillion and 30% Sauv Blanc, and when she said 11% residual sugar, I knew it was going to be dessert.  It didn’t let down.  Neither Wine Friend nor I really care for dessert wines, but this had a crispness that came through the sweet.  I can’t see myself having more than a small glass of it in a single day, but I can see why those who like sweet wines would enjoy this one.  It was a solid ending to the tasting, but again, sweet wines are not my thing.

From the experience perspective, I definitely enjoyed it.  This space is a little bit cramped, especially with the birthday party crew in there.  The taster did an admirable job balancing their needs with conducting our tasting, but I think had it been a nicer day, the little space may have ended up being overrun. 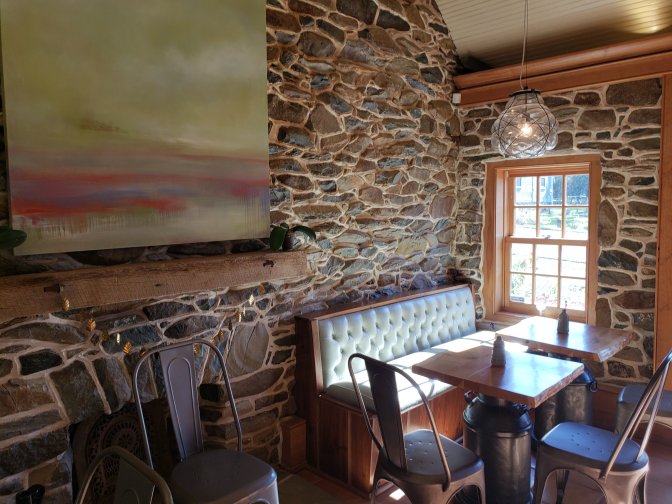 For an overall perspective, I’m definitely going back to Slater Run.  The taster shared that there is an expansion going on at the winery for a new tasting room and event area, and hopefully that will be ready to open in April (? – I’m not clear on the dates, I thought I understood her to say that).  They are a very low production winery, with about 1,000 cases per year, but an intent to grow.  I think they’ve got solid offerings with one or two stars in their lineup, and I look forward to seeing where they go in the coming years.