I’ve driven past it a million times and always meant to stop, and today was the day.  Since I missed out on scheduling Barrel tastings at a few favorites, I decided to just hit spots that weren’t involved in that, and make the most of the respite from arctic blast and looney snow. 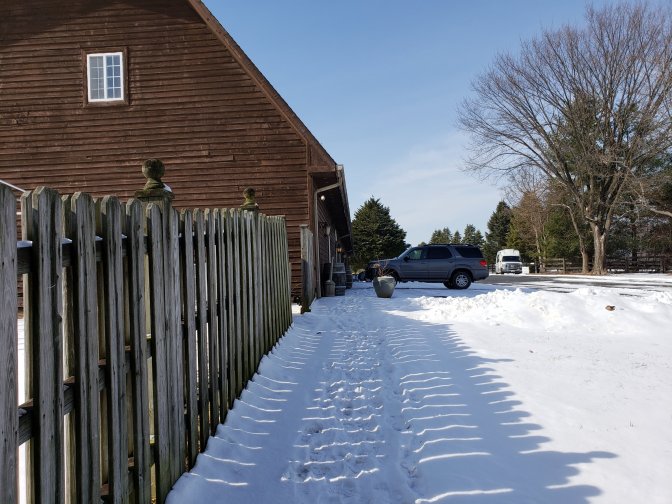 So 8 Chains North is along Route 9 in Northern Loudoun County.  It’s set back from the road nicely, so you get that great sense of peace as you pull up.  They have a sizable facility that can accommodate events and crowds.  Since I was fairly early, there was no crowd yet, but there were more people than I expected. 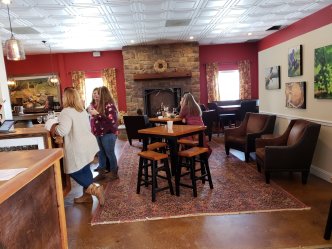 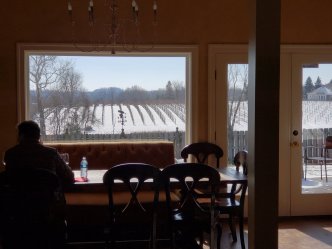 They offer six wines on the tasting flight, and it’s a good mix.  Because it wasn’t too crowded, I had the chance to ask and get lots of questions answered.  The tasting room associate was awesome, and I didn’t write her name down, so I cannot shout her out on here. :(.  Many of the wines are grown by the winemaker, with some grapes sourced from Washington State.  More on that below.

We started with the 2017 LoCoVino – a white blend that was a lot of sauvignon blanc and some viognier, finished off with Traminette.  I was told that because the winemaker felt it came out to acidic, he added some sugar, and it had some sweetness from that and the traminette.  It was crisp and had some melon and some honey to it, so if you like sweet wine, it would be good on a hot day.  Unfortunately, I don’t like sweet wine.

Next up was the 2016 Chardonnay.  This was fermented in barrel and had some toasty oak at the end.  There was also a little bit of pineapple to it, and no butteriness at all.  It was a nice Virginia Chardonnay.

I played the wine blog card, and so I was treated nicely – she had a sauvignon blanc (all estate grown) open on the bar, so I got a sample of that.  It was a good Virginia Sauvignon Blanc, some acid and some lemon to it in the taste.  It was a little mellower than I’m used to, but it was nice, so I bought dad a bottle.

On to the 2015 Tempranillo.  This was sourced from Washington State.  I was told a story about how they were short of fruit one year, and the winemaker drove around the west coast, particularly Washington, to find good fruit, see how it was grown, and buy it to supplement his offerings.  He like few places, built a relationship, and has been sourcing grapes he cannot grow here for several years now.  Hence, this tempranillo, which is gorgeous.  There was a lot of smoke and depth to this, with some plum in the front and a spicy/hot feel at the end.  I LOVE tempranillo, so this suits me well.  I kind of like what he is doing with this, since it’s labeled “8 Chains North West.”  He is honoring the Virginia grapes and terroir, but also playing with other fruit.

The 2016 Merlot was all Virginia fruit grown by the winemaker.  This was light and a little green, which surprised me.  I’m not merlot’s biggest fan, so I was lukewarm toward this one.

2015 Cross Country Red – This is a fun thing they made.  I was told that the winemaker had extra syrah (from Washington) and it was strong, so he decided to blend it – 75% syrah, 25% merlot.  The result was a solid blend in which the syrah is strong, but it gets mellowed beautifully by the merlot.  I’d drink this one all day.  It’s name is from blending west coast grapes with east coast grapes.

The 2015 Mourvedre – again, fruit from Washington.  Nice and dark, and the dark fruit had a nice jam feeling to it – not overly so (because other Mourvedre I’ve had was way too smuckersy), but pleasantly.  There were pleasant dark fruit notes to the taste and the slightest hint of spice with an astringent ending to it.  Good tannin, I think that means.  I liked this one.

I got bonus tastes too!  I really wanted to taste their Virginia Malbec, but it wasn’t open, so she treated me to the 2014 Washington state Syrah.  This had an amazing nose to it, and the depth of the dark fruit was wonderful.  We also had a great talk about Greenhill’s Syrah rose. I do love Syrah.

Finally, we had the 2014 Washington Cabernet Sauvignon.  This was from Washington because it was a tough year on the estate cab sauv vines.  This was pleasant with some plum and cherry, and a pleasant darkness to it.  There was a hint of smoke at the end of this one.

I wound up buying a Sauvignon Blanc for dad, and a Tempranillo and Va Malbec for me to bring home.  I’m thinking I’ll do another malbec comparison, I’m curious to see how this one differs from my favorite.

So, 8 Chains North is a like, and it’s one I will go to again.  The atmosphere was really pleasant and the staff seemed really great.  I wonder how busy they get, but the space seems like it can accommodate a good crowd.

Have you been there? What did you think?

One thought on “Saturday Afternoon at 8 Chains North”