You know how every time you read a book, even though it’s the same story or information, you learn something you didn’t quite see the last time.  The same is true with visits to Arterra.  Winemaker Jason Murray tends to hit many of the same themes in discussion about his philosophy, but every time I hear them, I come away with something new.

As it was with this visit, the vineyard tour with him.  Our visit began in the cellar with an explanation of philosophy and process, and a discussion of how the tools he chooses to use in the cellar reflect that.

Matt from WineTrails and Wanderlust checks out the bladder press. 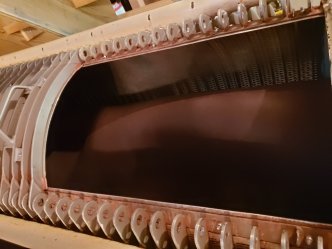 The selection of a bladder press that works quickly to squeeze the grapes, exposing the juice to less oxygen and moving it quickly to the next stage is one example.  Many wineries are using computerized equipment that slowly crushes to avoid bruising, but as they work slower, the juice is exposed to more oxygen and there is a greater chance you will have an issue to cover up in the process in the cellar.

Likewise, his destemmer and conveyer belt to the crusher works quickly to de-stem and works in a way that requires only one employee to remove excess “jacks” from the grapes before going into the crusher and then fermenter.

The whole process is about minimizing the need for additional intervention by taking great care of the grapes, in the vineyard and in the cellar.  Jason sees fermentation as THE defining time period.  During this window, temperature of the fermentation impacts how much flavor and tannin is extracted from the skins. He works to insulate and keep his reds in the low 90s while they lay on the skins to complete the process.  With his white wines, he notes that he combines the old world approach of native yeast with the new world approach of avoiding oxygen to produce white wines with vivid, bright, fresh fruit flavors.

After some time in the cellar, we headed out to the vineyard to walk around and see the vines.  Tannat was still hanging on the vines, and Jason noted that the climate change impact he is seeing now is that he used to pick tannat between Oct 15-30, but now it’s about a week or two earlier.  We were able to pull berries off the clusters and sure enough, they are ripe, and pretty delicious, even if they have HUGE seeds.  The chenin had already been picked, so I am patiently waiting for my 2019 chenin release in the spring.  The overall crop for all wines should be great, with good reds that ripened nicely in the dry fall.

Jason’s discussion goes deep with talking about the soil and why this soil on this site is so good, how the height above sea level is optimal here (cold air sinks into the valleys in the winter, protecting the vines from the coldest temps), and how he trains the vines.

Co-pilot was on the tour with me, for her first visit to Arterra.  She was impressed by Jason’s discussion and philosophy and raved about the wine.  We did a tasting and settled down with a bottle of Crooked Run, the new estate blend.

Matt from Winetrails and Wanderlust also joined us for the tour, tasting, and at the table outside.  I traded a Crooked Run for the two bottles of Petit Verdot he grabbed for me on his recent tour of southern Virginia wineries.

All in all, it was a great day in Delaplane.  If you haven’t been for the new reds, make your way there!