When we visited Labor Day Sunday, there was an event planned.  The sign at the entrance said “Loco Music Festival.”  Of course we assumed crazy musicians rather than LOudoun COunty… but nonetheless, the crowd was building, and we got green wriststraps to verify that we were old enough to drink (as if!).

It’s a nice tasting room – huge bar with many tables and a sizable outdoor area to enjoy your wine, and listen to music.  Grandale Restaurant is there too, and is a pretty well-known, high-end restaurant, I’m told.

So you belly up to the bar and start your tasting.  Six wines, and you have the option of adding truffles to your tasting as you like.  We went forward with just the wine. 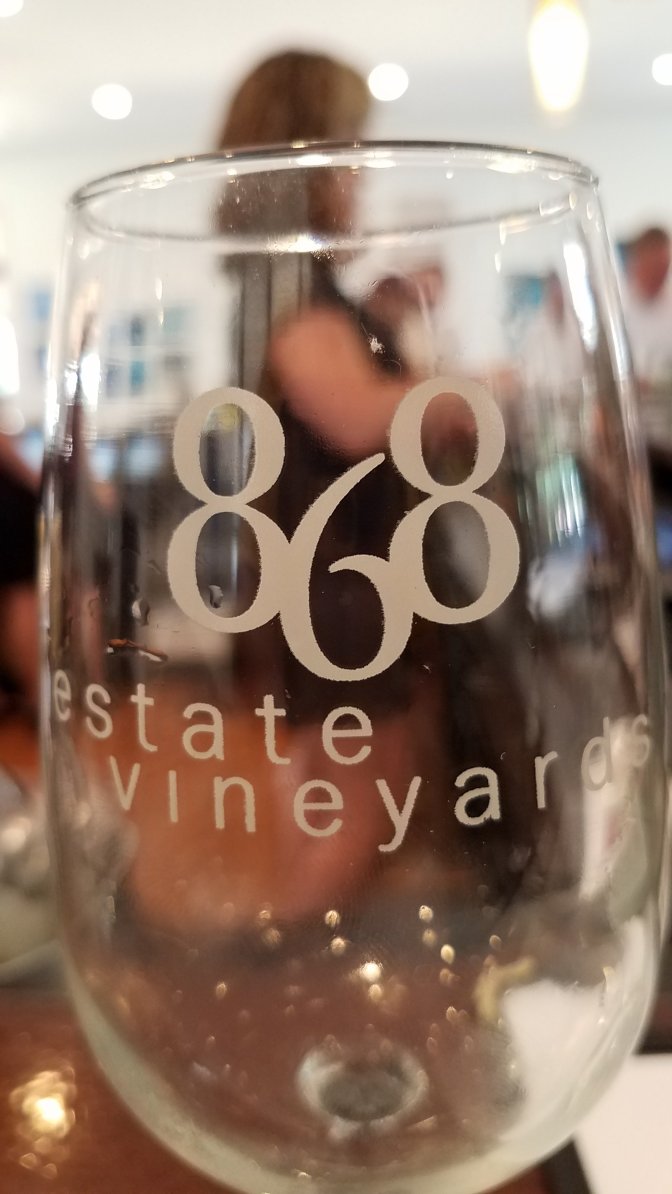 The tasting started with Sauvignon Blanc, the new release of their 2017.  The pourer told us that the 2016 had just sold out so they rushed to release this one.  It was pretty solid – nice and crisp.  This was a stainless steel fermented, which is how I prefer my white wine – so no weird flavors added on at the end.  All their grapes are grown on the property, and she even had a map to show me!

We moved on to the Chardonnay, which I was less crazy about – there was a small aftertaste to it that didn’t feel right.  This was when we realized that we weren’t getting the full talk through the tasting – the pourer actually just named the wine for us and poured it.  (*Side note, this is not how I plan to behave when I pour – I will talk your ear off with everything I have learned about the wine).

Next was something I had never heard of, Chardonel.  Apparently it is a hybrid of Chardonnay and Sauv blanc.  There was a strange sweetness to it, and this was the first wine I poured out.  We all did.  Merlot was fourth – this was ok, but kind of plain.  I’m not very big on straight up merlot anyway, but this one felt so weak.  Then the 2016 Cab Franc came out – this was a nice strong wine, bold in taste, and really felt more like a cab sauv than franc.  Even the husband liked it, much to my shock.  We did finish with the cab sauv, which was good, but honestly not as good as the franc, which simply shouldn’t be the case. I was able to ask for a taste of the Meritage Reserve, and that was astonishing and good.  I really loved that and decided to jump in on two bottles of that and one sauv blanc.

They also offer decent food plates, and there is a grill there for lunch.  They do pack quite a crowd in, and as our second stop of the day, we noted that a certain limo-bus of bridesmaids was stopping in all the same places we were.  I think that’s the impression I left with – some good bottles, but over kind of in the middle, and the kind of place that the bridesmaids go to drink heavily, rather than savor good wine.  I’m happy about the three bottles I brought home, and plan to enjoy them, but the overall scene wasn’t what I was looking for – I didn’t get “serious about good wine” here.  I think it may be worth checking out this place again, but my gut says it’s mass market and they’re going for massive crowds coming in, so I don’t think it’s really for me.  On to the next one…